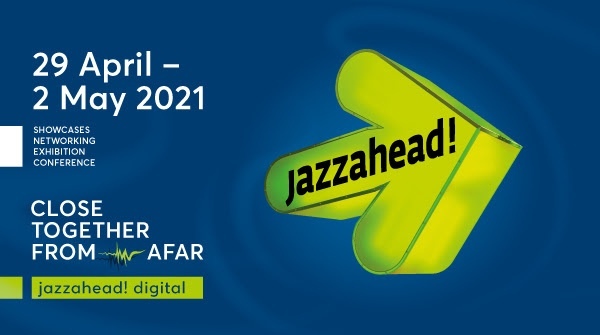 jazzahead ! is the annual industry gathering of the international jazz scene in Bremen, Germany. In 2019, 3,408 participants from 64 countries were registered.

jazzahead! connects the international scene since 2006. The participants of jazzahead! come from all areas of the scene such as: artists and promoters, bookers, labels, agencies, publishers, festival and club programmers, distributors, lobby institutions, associations, press and more. Learn more at https://jazzahead.de/en/

Interactivity
• Via the global list of participants, which contains all exhibitors and professional participants, you can get in touch directly per text or video chat
• In the panels continuous interaction between the participants and speakers via chat, surveys and Q&As is possible
• Virtual 1:1 or group meetings, either by making appointments/contact beforehand or instant video calls

Matchmaking & Networking
• Digital matchmaking between participants, based on the previously completed matchmaking criteria (groups/areas of interest, functions etc.) in their profiles
• Networking of participants before, during and after the digital event (opening and closing dates tba)
• Contact and documents/file exchange among each other via chat, scheduled video calls or direct video calls is possible
• 1:1 speed dating with automatic random assignment of another participant for a 1:1 video call, based on the matching criteria

Showcases
• Live streaming of the jazzahead! showcase concerts and – in consideration of the time zone differences – on-demand videos of the performances on the next day on the platform

← Previous Event Next Event →
We use cookies on our website to give you the most relevant experience by remembering your preferences and repeat visits. By clicking “Accept All”, you consent to the use of ALL the cookies. However, you may visit "Cookie Settings" to provide a controlled consent.
Cookie SettingsAccept All
Manage consent

This website uses cookies to improve your experience while you navigate through the website. Out of these, the cookies that are categorized as necessary are stored on your browser as they are essential for the working of basic functionalities of the website. We also use third-party cookies that help us analyze and understand how you use this website. These cookies will be stored in your browser only with your consent. You also have the option to opt-out of these cookies. But opting out of some of these cookies may affect your browsing experience.
Necessary Always Enabled
Necessary cookies are absolutely essential for the website to function properly. These cookies ensure basic functionalities and security features of the website, anonymously.
Functional
Functional cookies help to perform certain functionalities like sharing the content of the website on social media platforms, collect feedbacks, and other third-party features.
Performance
Performance cookies are used to understand and analyze the key performance indexes of the website which helps in delivering a better user experience for the visitors.
Analytics
Analytical cookies are used to understand how visitors interact with the website. These cookies help provide information on metrics the number of visitors, bounce rate, traffic source, etc.
Advertisement
Advertisement cookies are used to provide visitors with relevant ads and marketing campaigns. These cookies track visitors across websites and collect information to provide customized ads.
Others
Other uncategorized cookies are those that are being analyzed and have not been classified into a category as yet.
SAVE & ACCEPT